Are You a Young Person Considering Re-Homing Your Dog? -Consider This.

Yuri was a happy, fun-loving, pot-smoking, young Brazilian man living the beach life in SoBe, Miami, when we met.

A happy-go-lucky type, even when luck wasn't much on his side (which was pretty often), Yuri was also a dog-lover.

He was my friend.  We ran with some of the same crowd of Brasileiros on Miami Beach, and he was just a great person.  I was working at the shelter then.  And he was open to having a dog.  Back then, if you were 'open to having a dog,' and I knew you... you were targeted, or soon-to-be-targeted as a potential adopter for a sweet, innocent death-row-dog.  Reason being: circa 2010 Miami Dade was still euthanizing for time/space (this means lack of time/space in shelter talk), and pet euthanasia was a daily reality in the shelter then.

And as much as I tried to keep from going to URI (upper respiratory infection), a long, double-sided row of kennels housing our dogs with URI, I could never stay away for long.  Since it's viral and highly contagious, this is where dogs were sent when they came down with kennel cough.  In URI they'd be treated with doxycycline. However their quality of life there was low since they couldn't be seen by the public (restricted area), they weren't allowed to get out to be socialized, and due to a policy I never understood, they weren't allowed to be moved back to the adoption floor once their URI symptoms had passed.  So they would sit there for weeks on end prior to either being euthanized, or 'pulled' by a rescue. And some were adopted... thanks to massive networking efforts from people like me, or just plain luck! 😅

As Adoptions Coordinator, part of my job (per me) was to socialize our dogs.  We had a huge fenced-in area at the old MDAS shelter in Medley. -And a smaller, fenced-in concrete area, for socializing dogs.  That was great.  The new shelter doesn't have a fraction of the open space for socializing that the old shelter had.  -Anyhow, when I'd take dogs out, 2-5 at a time, to run free in the big lot, of course I'd give them attn once they were calmed down, photograph and network them.  All of this = bonding.  Of course I bonded with a number of dogs on a weekly basis.

Choco was one of those dogs.

He was a Happy-Go-Lucky, Fun-Loving, Orange-Brindle, Pit Mix.  One day I got to work, went to say hi to my canine buddies with whom I was working (it was physically impossible to work with each dog, but I tried... and was very good at delegating 'who to get out' with volunteers).  -And Choco wasn't in his typical run. My heart sank.

I quickly went back to my desk in a tiny cubicle I shared with Lost and Found to type in Choco's name and see where he was... URI.  Oh no. 🙈

"Oi Yuri, Tudo bem?" I said, and went on to explain there was a dog at my work that would be perfect for him.  Happy Go Lucky Dog, Happy Go Lucky Guy, Both Young, Full of Energy... it could work.  -And time was of the essence for Choco.

Yuri found a ride to MDAS for later that day or the next day... yay! He met and loved Choco, "Que da hora, adorei," he said, gently laughing when he met Choco.  It was a match.  He was willing to save Choco's life.

With any dog there's a transition period, for some it lasts longer than others.  It's almost always a lot

of work at first!

Choco didn't meet a stranger. He was a delightful lovebug.  But he was still just a big puppy.  He destroyed Yuri's already-semi-wrecked-apartment by chewing up the sofa, amongst other things.  Naturally I encouraged Yuri to crate train, etc., but he was doing things his way.  And... nothing could have made him want to get rid of Choco...

except for being undocumented, becoming jobless, completely broke, with eviction notices taped all over his studio apartment door... right on Collins Ave nonetheless... great location to become homeless.

"Jessica, I'm so sorry.  You know I love Choco.  But I can't stay here.  I have to go back to Brazil.  I'm losing my apartment, and have no job.  I have no money.  My mom is buying me a one-way plane ticket home.  She doesn't have much money either and won't get Choco a ticket," Yuri explained, feeling like crap, over the phone one day.  If memory serves, I was at work when he called.

"Yuri.  You cannot do this.  You made a commitment to Choco.  You've messed up so many things.  You can't live in the US anymore, alright, but that's not Choco's fault.  He shouldn't have to pay the price for your mix ups, possibly with his life," I said.

I was livid.  Of course I felt badly for my friend too, but at that moment, this was a life or death issue for Choco.  I couldn't bear seeing him sent back to the shelter, only to be put to sleep.  -Back then returns, nor pit mixes, were very popular.

And from somewhere, wisdom was bestowed on me. I went on, "Yuri.  These things happening in your life right now are all temporary.  The predicament you're in will pass.  Choco's not temporary.  He's your dog. He's meant to, and wants to, be with you through thick and thin for his whole life... at least a decade.  How will you feel when you look back on this in a year? 5 years? 20 years?  You have the chance to do something really important, really right, right now.  -You can make this work.  Tell your mom to please buy that ticket for him. -Tell her you'll pay her back!  --This is make or break the way I see it.  This is a fork in the road... you become a man and do what's right, or you stay irresponsible, floating on the whims of life."

And thanks to his wonderful mother, and his receptiveness to my 'newly-bestowed-wisdom,' it worked.  A plane ticket and all the appropriate paperwork were purchased for Choco.  He returned to Brasil with Yuri.
We saw them on a couple of visits to Brasil years ago, before we had our son.  Yuri went on to meet an animal-loving gal, and become her life partner.  They live happily together now, with Choco, another adopted dog, a couple of rescue cats, on location, at his English as a second language school in a beach town in Brasil.  -They are happy. 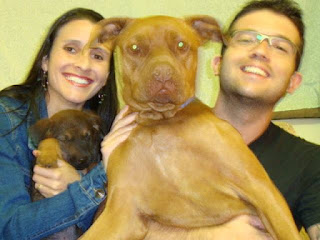 And I am convinced that making the choice to take Choco with, all those years ago (circa 2011), did indeed help mold Yuri into the man he was destined to become.
Thank You Choco.  Thank You Yuri.
If you're considering giving up your pet, please reconsider.  It's rarely the right decision.
If the pet is a danger to you or someone in your family, or your life isn't safe for your pet anymore, that's different.  But in most cases, pets are meant to stay with their owners, their families.
They will make you a better person... if you give them a chance.
This will be a 3 part series.  I've had 5 people reach out in 7 days, considering returning their dogs.  As the owner and operator of this rescue, we take pets back in when needed, but we try very hard to encourage people, whenever feasible and possible, to keep their pets.  🐾

Popular posts from this blog

Moving to a Nursing Home, Must Re-Home Dog... or Not?

February 16, 2021
What do you feel, or think, when you read this Facebook post? This post circulated on Facebook in early February.    "Yes I can help," was my initial thought when I saw this (a couple of rescue friends had tagged me).     It took about 5 seconds for my brain to process the gravity of this post, and for  ~what I know  to come~ to surface.     " Often a pet is a senior’s sole companion and when they lose their pet, the senior often goes into a downward spiral and we end up losing the senior not long after the pet is gone," as simply put on hospets.org .      Losing a pet, especially for a senior citizen, can be fatal.          So when I read through some of the comments on this post's thread, seeing only, "I can take the dog," "I pm-ed you," and tagging so-and-so and so-forth, I felt helpless, and at the same time wanted to scream.       Hello... is anyone thinking about this lady?!      Of course I commented on the thread, mentioning our rescu
Post a Comment
Read more

June 17, 2021
Dear Chunky,     During the summer of 2007 you came home with me.  Then, I was working as an Animal Care Specialist at Louisville Metro Animal Services.  One of my functions was to clean the cat rooms and feed the cats.  There was a kitten room and a cat room. A Young Chunky!     You were in the free roam kitten room.  The only problem was, with each passing day you were looking less and less like a kitten!  You were twice, or even 3 times the size of the kittens in that room, and had pretty much grown up in there.  One day I told myself, 'if he's still here tomorrow, I'm adopting him.'  I told myself that a few days in a row, and every day at the beginning of my shift, upon seeing you, I'd feel a mixture of pena for you and silliness for me and us (like I'd chuckle to myself 'ok, you're still here!').       I really didn't 'want' or plan to take a cat home at this time.  Back then I was still married to my first husband, hadn't
2 comments
Read more

April 23, 2019
One evening, while in Miami for vacation, I met up with an old friend I know through pet rescue work.     It was great spending time with this friend, especially since she radiates joy.    While catching up, we inevitably stumbled upon the subject of pets . Yes it looks pretty but so does non-chemically-treated grass     My friend mentioned that her family had lost their 3 dogs, all to cancer, within months of each other a few years back.  -Clearly this was a devastating blow.       "Were you feeding them high-quality food?" I asked.  "I must admit, I was giving my dogs 'ok-dog-food' and never had put much thought into what they were eating... until I lost them both to cancer within a year of each other.  My collie mix passed away at age 8 and my shepherd mix at age 9," I added.      "Yes, we fed our dogs high quality food, Nature's Recipe Grain Free is what we had always given them.   I did some research after they died
Post a Comment
Read more

The Paw and Feather Plan